Today is moving day but first we need a geography review.  We started our journey in Cape Town, South Africa. South Africa covers the entire southern tip of the continent with the Atlantic Ocean to the west and the Indian Ocean to the right. Then we took the train to Pretoria and Johannesburg in the northern part of South Africa. Botswana is to the immediate north of South Africa and we flew to its north-east point to get to Chobe Park. The airport we had flown into a couple of days earlier is very near a point where four African countries meet. Botswana, (which we’ve been talking about), Namibia, Zimbabwe and Zambia. I don’t know anything about Namibia to the west. Next trip. Zimbabwe is to the east and that’s where one of the bad boys of Africa resides, as you no doubt know. Robert Mugabe is well known for seizing the assets (farms) from the white landowners and “redistributing” them to the general population, i.e. his friends. The economy has tanked, people are in an uproar and it’s all very ugly. Anyway we’re close to all that, but where we’re going today is Zambia, to the north and quite unlike Zimbabwe.

The day started like any other moving day. Breakfast (on the deck), packing and checking out. Our driver showed up mid-morning in the now ubiquitous open Land Rover. In go the suitcases and the Barnetts and we’re Zambia bound. You may recall that we’re 20 to 30 minutes away from anything resembling a road. Our driver is just a cab driver but seems to have some idea where to go although how, I have no idea. He’s not perfect though because about half way out we get stuck in the sand. For the next 15 minutes we do the stuck in the snow thing, move forward an inch, step on the brake, put it in reverse, jam it, step on the brake and repeat. And repeat and repeat. I was just getting ready to call AAA when he finally managed to lurch out of a hole which I’m sure will ensnare the next vehicle that comes along. No more delays though and we finally make it to a paved road. Down the

road for a half hour or so until the next leg of the journey. Now, our driver doesn’t speak great English and my Botswanese is a little rusty so basically although he’d told us what was going to happen, we didn’t really have a clue. However, we eventually come to the end of the road at the Zambezi River. We’re motioned out of the car through passport control and then dumped at the river’s edge, suitcases in hand. We see a traditional ferry going across the river but it seems to only carry trucks and then only one at a time. We’re motioned to a spot on the beach where we await a small open motorboat coming our way. We presume this is going where we want to go and jump in.  As we pull away from the water’s edge I begin to think this could go several ways. A few minutes later we arrive on another shore which we suspect is another country and hope is Zambia. We and our suitcases are ejected and we look around, just waiting for that Mugabe guy to show up and in a bad mood. But I finally hear those magic words “Stewart” being repeated over and over. I raise my hand and we’re escorted to a van past several dozen locals eager to do a deal. After passport control on that side, which consisted of giving our guide our passports and $100 we’re in and off we go to the Toka Leya camp near Livingstone.  (Note re truck ferry. As we drove to the river and as we drive away on the other side we observe a line 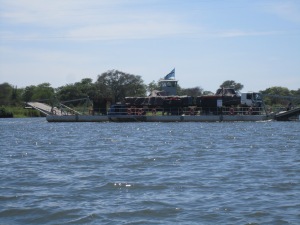 kms long of parked transport trucks on the road. There is a ferry but it is only capable of taking one truck at a time. The crossing takes about 10 minutes. I’ll save you the math. The normal wait time for a lorry driver to get across is 4 days. It’s not unheard of for the wait to be 10 days. Apparently there is talk of building a bridge, but that conversation has been going on for 17 years.)

Fast Facts part 2. Livingstone is a city in Zambia famous for two things. One is being adjacent to Victoria Falls. More on that later. The second is having been founded by the Scot, David Livingstone. You’ve heard of Dr. Livingstone, I presume? He was a doctor / missionary who did lots of excellent things in the mid 19th century for various parts of Africa and this part of Africa in particular.

Toka Leya is a camp near both Livingstone and the South Luangwa game reserve. This camp is only about 10 minutes off the road and almost has a real road. It consists of 12 tents adjacent to the central common area where on a very large deck there is dining, lounging and bar facilities. All quite nice. Each tent is really four walls covered by canvas

with the whole structure on an elevated wooden platform.  It sounds primitive but is actually quite luxurious. We’re going to be here for three nights. Peckish again so it’s lunch and back to the room for an hour to think something like “What have we done?” But we don’t have a lot of time for that because we have to get ready; it’s safari time again! We meet Sandy who will be our driver/guide/escort/advisor for our stay. Luck of the draw but we are the only guests he has to put up with for the next three days. We jump in the back of his Land Rover and head out to the game reserve. On the way he takes a trip down a side road, stops at a hut and waits for a guy in a uniform carrying an AK47 who jumps in with us. Refer to earlier question re “What have we done?” On the way to the reserve Sandy explains that some rare white rhinos have been spotted in the reserve and are being guarded against poachers by military patrols. Our passenger’s role is to try and convince the guards to let us near the rhinos. I’m wondering how much convincing you need to do when you’re carrying an AK47 until I learn that the guards all have them as well. Ohh Kay!

On the way in we pass near a couple of giraffes. We’d seen giraffes in Chobe but not close up like this. Finally, we locate the guards.  (Side note re guards. White rhinos are subject to poaching for their horns which are then sold in Asia. They are so threatened that many of them are put under protection. When a rhino is spotted in Zambia, a three man team is assigned to each sighting whether an individual rhino or a group. That’s three men per shift, three shifts per day, seven days per week. ) Our passenger jumps out, wanders over to the guides and confabs for about 5 minutes. There seems to be some resolution to the discussion, a package exchanges hands and passenger advises Sandy that they’ve agreed to take us to the rhino. We jump out of the vehicle and meet our new escorts who explain the rules. No noise, single file and if they say jump we jump. Off we go into the bush. After about 5 minutes we catch sight of some animals. It turns out to be six white rhinos alongside a large herd of wildebeest. Rhinos can be aggressive so when we get to within 30 or 40 feet and we’re told to stop, we stop. We spend the next 15 minutes watching them

and taking pictures until we’re motioned away and back to the Land Rover. Quite an opportunity. Nothing has been said, but I know I’m expected to show our gratitude in a material way but as we walk back I begin to wonder how material it has to be. If you under tip a waiter you might have to put up with a little extra something in the soup. But stiffing 3 guys in the jungle with AK47’s doesn’t seem to 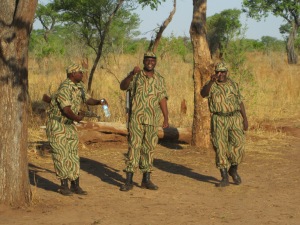 be a great idea. Anyway, when we get back, I hand them the equivalent of about $20 and look for a reaction. It’s favourable and we’re free to go. We take passenger back to his hut where I see another $10.00 disappear. Sandy asks us if we want to keep on going and we realize that after Chobe and now having seen the last of the Big 5 we’re gamed out. Plus I’m running out of cash. Back to the camp, where we head to our tent to get ready for our first dinner at Toka Leya.

At Toka Leya, we’re not supposed to walk unescorted after dark. We are in the wilderness after all, and wild animals roam freely. However, the first night we feign ignorance and brave the 2 minute walk from our room to the common area on our own. We arrive to the first sighting of fellow guests. We go down to the open air bar, near the river planning on meeting some of them.  It turns out that there is a group of 18 Americans travelling together who are rather cliquish. Dinner is one setting and normally the hotel assigns table partners depending on who has spent the day grouped together on the various safaris and tours. However, the group of 18 are seated together in one large table. It looks like we are going to be eating alone when one of the staff come over and introduce us to the only other two guests in the camp, two women from New York. We’re all along with Sandy, our driver/guide/escort/advisor seated and exchange pleasantries. They’re conveniently both named Susan and have been travelling together around Africa as well. Nice enough. So a couple of women from New York travelling together. We’re wondering if they’re, you know, but we don’t dare to ask. There are clues and Claire and I exchange knowing glances. Now, some of our American friends from Florida are following this blog and I know they’re not as comfortable with this subject as Canadians but I just want you to know that we didn’t have any choice; we had to sit with them. But the girls finally brought it up themselves and it was true; they were Democrats. They and their husbands and all their friends; all Democrats. In fact, this was just after hurricane Sandy and the eve of the Presidential election and they were worried sick that the hurricane was going to result in a low New York turnout and lose them the election. Anyway, we had a very pleasant meal with them, after which we were all escorted back to our tents for the night. 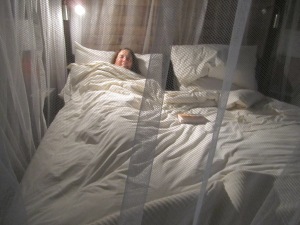 No question of the day. Aren’t you paying attention? It’s night time. Will have to wait until the end of our stay, next post.