We arrive at the train terminal in Pretoria and waddle off the platform . The hotel driver picks us up and delivers us to the hotel. The 131 Herbert Baker “hotel” is a 10 room property. Very pleasant, nice room. In a very nice neighbourhood Rothesay kind of place with one difference;  every property has 6 to 8 foot fences with gates topped with barbed wire. Our hotel had an armed security guard on the gate. We’re told that walking in the day time is “probably” all right but not to go out at night unless driven. They do have a nice small dining room there and we have beer and a curry. After the train, heaven.

The next day was a long touristy kind of day. Won’t bore (note the spelling!) anyone with the details but some impressions. Our guide was an ex pat Chinese, Danny Ho, who came to South Africa to avoid political oppression. Interesting back story of which I suspect half is true. Good guide though. We do a drive through tour in Johannesburg and also a tour in Soweto. But like a lot of things in Africa, nothing is as you would expect. Although Johannesburg is the corporate capital of South Africa, Johannesburg downtown is a jungle! Once a thriving modern hub bub of a city. In the 80s more and more outraged blacks migrated to the city. Crowding and crime went up, whites and businesses moved out. Repeat, repeat, repeat. Today it’s unsafe, dirty and a hovel. Over a 90 minute period in a city of approximately 10 million people we didn’t see a single white person on the streets. You know in the sci fi movies where the bad guys have taken over New York and the streets are garbage strewn and windows boarded up and sewerage running in the streets, and roving thugs are everywhere? You don’t? Well anyway, that’s downtown Johannesburg. Former high rise hotels and office buildings abandoned. Unbelievable! And no apparent way out. It is ungovernable and continues to deteriorate. Our driver (who was a little prejudiced) maintains the best thing that could happen would be a natural disaster swallowing up all the inhabitants. Nice sentiment! Now, for something sort of completely different we do a tour of Soweto. Soweto was a grand project to relocate the blacks away from then prosperous Johannesburg in the early part of the 20th century while keepmg them close enough to do the work. Very ill conceived and poorly executed, it eventually produced massive riots which got worldwide attention. But here’s the thing. Today around 4 million blacks live in a safe secure community with free water and subsidized power and housing. It’s clean, and orderly while the original Johannesburg is going to hell. Go figure. We do a little walk around, visit the Apartheid Museum and have lunch in a building in Soweto where a homeowner has opened his home to visitors. All safe, all clean, food not bad.  (You might ask where did all the whites and businesses go? It seems that they moved out of the downtown, mostly to the northern perimeters where they provide their own security and things are all very modern and urban; and white. This never ends.

Back to the hotel and another beer and curry. (Can’t get enough) Oh, Claire said to mention the Jacarandas. There were lots of Jacaranda trees.

I’ll mention the next day before my pompous sum-up.

We’re driven to Johannesburg airport by Sonny. Sonny truly is sunny and like every other employee in the hotel, black, industrious and friendly. He explains that he and most of the staff are from Zimbabwe. His family still live there and he only sees them three or four times per year. Of course Zimbabwe has its problems and there is no work. Sonny and many of his fellow black countrymen are outraged that the farms owned by the whites have been seized and handed over to Mugabe’s cronies. Not so much on principal but because it has led to failed enterprises and no work. He and many others have had to emigrate to South Africa to find work. His comment is there is lots of work in spite of the unemployment rate because South African blacks are known as lazy and untrustworthy. As “African” as he is and as “black” as he is, he too would feel unsafe if exposed to many of the native South Africans. His “plan”? Keep on working until Mugabe dies and his replacement returns the country to stability, when he’ll return home. Still he’s as sunny as they come. A maudlin side note. We mentioned that we had been on the Rovos Rail. He was genuinely pleased that we had been on it proudly telling us that once he had had the opportunity to take his daughter to see the Rovos Rail when it arrived. As far as he was concerned we had had a shared experience. The fact that we’d been bathed in excess for 3 days and he’d seen it for 30 minutes didn’t bother him at all, he was equally pleased for both of us. Humbling.

The pompous sum up. Socio-politically, this is one weird region. It’s not so much a black vs white thing. Many blacks and whites co-exist and co-operate with respect and regard. But every demographic has a rationale as to why they have been disadvantaged and why they’re not going to put up with it anymore. Some of their resolution strategies work and some of them are mutually self-destructive. Tragic really. Rich in resources, post colonial, post apartheid, you’d think it would be one giant coke commercial. I don’t know how to assimilate everything. My only real takeaway is that when I came here I assumed that the ruling colonizers abused the countries and left them poorly prepared for their future. No doubt true but the story is more complex. Sooner or later, people have to move on and help themselves. More on this to come.

Question of the Day.  Those with day to day power in South Africa seem to have a very high material lifestyle available to them. Ignoring roots, family and friends for the purpose of this question, would you trade your typical middle to upper middle class North American lifestyle for one in which you had a much nicer home, with hired domestic help and other trappings of upper class lifestyle, if it meant you had to deal with security concerns and live in a community with enormous gaps between the few that have and the many that don’t? (As mentioned in the contest rules you can comment on this blog, just think about it yourself or ignore completely no matter how insensitive that would be.) 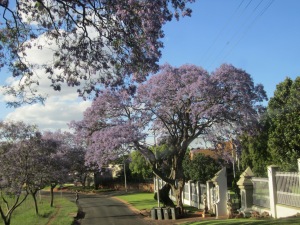